The Meaning of the Name Kogen Dojo – The Story of Kogen Dojo Pt 4
Try a FREE class! 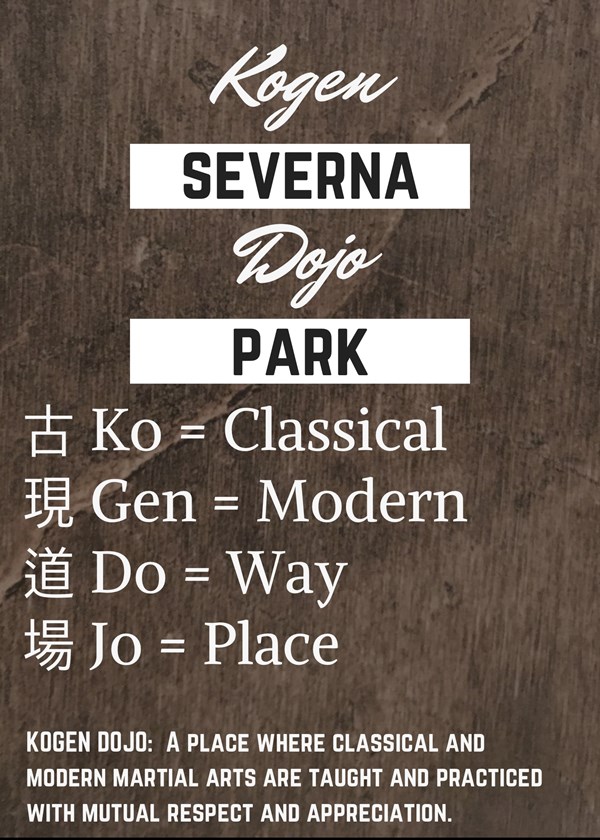 When Dwayne Bowie and Robert Van Valkenburgh first sat down to talk about how their new martial art school would be structured, they realized that that their concept did not yet have a name. They started brainstorming. Robert’s home dojo, out of which the original members of what would become Kogen Dojo were training, was called Seiya Dojo.* Pronounced shay-yah, the name Seiya was an homage to Robert’s first teacher, Joe Sheya, who had passed away a few years prior.  Dwayne and Robert agreed that the name Seiya Dojo was too personal to Robert to be used as a name for their joint venture and should remain the name of Robert’s home dojo alone. This left the two struggling to find a name that best represented their partnership as well as the values they envisioned for their new academy, which would offer Gracie Jiu-Jitsu for children and adults, Taikyoku Budo (Japanese Jujutsu) and Taikyoku Kiko (Qigong) for adults, as well as women’s self defense classes, and fitness classes.

They started listing characteristics of their personalities and their ideals, hoping to find inspiration in that. The common ground between Dwayne and Robert was a mutual respect for one another and the arts they practiced and taught, as well as a love of grappling. They came up with several ideas that were either already taken by other academies or were not quite the right fit for their vision. Liking the idea of a Japanese name for the school, something that had more depth of meaning and character than an explicitly English word, Dwayne suggested that they reach out to Robert’s friend and mentor Ellis Amdur, a practitioner and historian of Japanese martial arts.

With the pair’s common love for the grappling arts, one idea Dwayne and Robert discussed with Mr. Amdur was including the term torite within the name. Torite is an old Japanese word for grappling that means ‘trapping hand’ and is one of many terms used within classical Japanese systems to describe what are now known as jujutsu skills. One of the two classical Japanese systems Mr. Amdur is a licensed instructor of, Araki-ryu Torite Kogusoku, is a several hundred year old system of grappling with weapons, so the use of the term torite in the dojo’s name would have been a reference to Mr. Amdur’s influence on the group. In the end, however, Torite Dojo just didn’t feel like the right fit and Dwayne and Robert began brainstorming once again, now with the help of Mr. Amdur.

Finding just the right word or phrase to embody the relationship between Dwayne, Robert, their training partners, their teachers, the ideal they were reaching for, and the arts the new school would offer proved to be a difficult task. One day, Robert realized the solution to their problem was right under their noses. Ellis Amdur’s personal training history included classical martial arts and modern martial arts from all over the globe. Amdur celebrated and embraced the similarities and the differences in all of the styles he had touched over the years, from Japanese koryu (classical systems of combat) to Aikido, Brazilian jiu-jitsu, Muay Thai, and even Chinese internal arts like Xingyiquan or Baguazhang, using what he learned from each to inform his main practices, while also respecting the uniqueness of each system, ensuring that they remain intact as a thing in themselves. This was what Dwayne and Robert wanted their academy to be, not a melting pot or a fusion of different arts, but a place where multiple styles would be taught and practiced with respect for both the differences and the similarities of each. Amdur had already coined a term for this combination of classical and modern martial arts in his personal website and blog: Kogen Budo.

Kogen is a term Amdur came up with as a way of expressing the potential synergy of classical and modern martial traditions when practiced with the correct focus and respect. The Japanese prefix ‘ko’ (?) refers to something old or ancient, as in koryu (??) or kobudo (???), ancient or classical martial traditions. The Japanese prefix ‘gen’ (?) refers to something in the present with gendai (??) meaning modern, as in gendai budo (????) as in genryu (??), modern martial traditions. Robert ran the idea past Dwayne who sat with it for a while before giving his go ahead to ask Mr. Amdur what he thought about the group’s using his term to name their new school. After some consideration, Amdur approved of the use of the term and Dwayne and Robert’s school had a tentative name: Kogen Dojo.

Around this same time, Robert’s brother Matt got wind of Dwayne and Robert’s plans to open a new martial art school. Matt approached Dwayne and Robert about joining their venture. Without hesitation, Dwayne and Robert decided to make Matt a full partner. With a new partner, much of what Robert and Dwayne had discussed and agreed upon between themselves needed to be re-presented for Matt’s input and approval. Matt asked the pair if they had come up with a name for the school and they explained Kogen Dojo to him. He considered it for a while and eventually approved. The three of them discussed several variations of the name, but concluded that simple is best and the name Kogen Dojo became the official operating name for DMR Group LLC’s martial art school.

Offering Gracie Jiu-Jitsu for children and adults, Muay Thai for children and adults, Taikyoku Budo (Japanese Jujutsu) and Taikyoku Kiko (Qigong) for adults, women’s self defense, jiu-jitsu for first responders, yoga, fitness classes, and more, Kogen Dojo (????) is a place where both classical and modern martial traditions are trained and taught with mutual respect, creating a whole that is greater than the sum of its parts.

Site by AT Integrated Inc